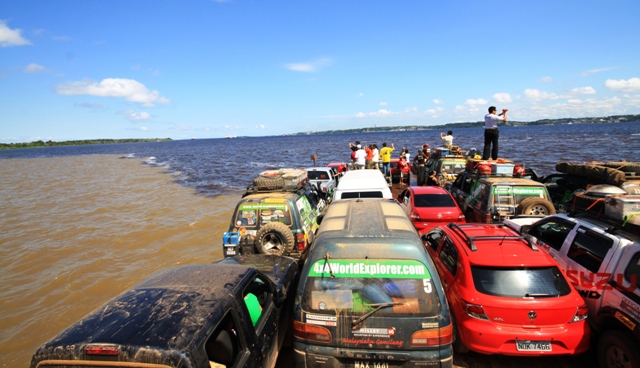 Hello guys we wanted to share this with the ExPo members. Recently here in Venezuela an expedition got started with the fellows from 4×4 World Explorer. It was a real pleasure to get to know them. Here is a small article we wrote and translated to share with non Spanish speaking explorers, adventurers, and overlanders.
Its not written in the best English around but it had to be as close a possible to the article in Spanish

We hope you enjoy!

Sunday July 25th 2010, as it is usual for this group of expeditionaries, like it has been for the past 18 years, 4×4 World Explorer officially started its most recent expedition, The Trans Amazon 2010 Expedition. It was members Just4Crusiers whom were entrusted to assist the 4×4 WE departure from Caracas.

4×4 World Explorer is an organization of adventure enthusiasts, who for the past 18 years have managed to make the realities out of their dreams and those who ride with them. Departing from Malaysia, and traveling the most remote locations. They have traveled five continents; Africa, Asia, Australia, Europe, and America have all been visited by theses adventurers on their journeys.

During this journey 4x4WE starts a in a new adventure through the Amazon Rainforest. The expedition departs from Caracas, traveling through Cumana, Ciudad Bolivar, Canaima National Park, and ending its Venezuelan leg in Santa Elena de Uairen on its southeast border with Brazil. Once in Brazil they will travel trough Boa Vista and Manaus in the Brazilian Jungle. They will then take the famed BR-319, which will lead them to Porto Velho where they will leave behind the Amazon via Rio Branco. They will enter Peru via Iñapari and travel the Interoceanica highway to Puerto Maldonando entering the Peruvian Amazon.
Upon leaving behind the warmer Peruvian Jungle, they will stop to see the Nazca Lines, and the mythical Machu Picchu. Lima will be they destination of the journey from where they will part to their Homes in Malaysia and South Korea.
On this opportunity, this expedition is being thoroughly documented; traveling with them is a television crew from KBS (Korean Broadcasting System), a group of Malaysian Journalists, South Korea, and Denmark.

The Trans Amazon 2 2010, is made up of more than 25 people, traveling in 7 vehicles, 4 of which, are Land Cruisers. Our friend Thomas Foo is the expedition leader. Himself being a legend in the world of 4×4 in Malaysia and the World. He is a founding member of the 4×4 Adventure Club Kuala Lumpur as well as being a founding member of the famed Rainforest Challenge; one of the toughest Off Road races worldwide. Just by this single curriculum, it was Just4Crusiers’ pleasure to receive Thomas and the team in a new visit to our country.
Thomas travels onboard a 1994 HZJ80, which is affectionaly called Boabab. We were explained that all vehicles have peculiar named, all product of their Journeys.

Among the team leaders we also find Rate Da Silva, whom is called Double Zero, Rate is an expert Mechanic and in doing reconnaissance. He drives an Izusu D-max Diesel that was especially prepared and delivered to the team by Isuzu Malaysia. He is one of the most experienced off roaders on the team.
Mohammed Assir, AKA “One Dollar” is entrusted with the logistic, according to Thomas his mission is that “things go as planned”. His other assignment is to be the sweeper car, the last car of the group making sure no one is left behind or gets lost. One Dollar drives a High roof 60 series with a swapped13B Engine, originally used in Toyota Dyna trucks.

The 13B is an evolution of the famed 3400cc 3B diesels but with direct injection. Upon seeing this modification we asked why not add the 13BT, which is essentially the same engine but turbocharged. They explained to us that during long expeditions they need the most reliable parts. Therefore they sacrificed a little power for simplicity. The same concept was applied to the 80 series Land Cruisers which are 1HZ.

On the team is also Amunruddin Sabri, mechanic, Alyna Tai, in charge of supplies as well as journalists and personnel with medic knowledge. The expedition is being documented by a film crew from Korean Broadcast System, who travel in a very nice Mitsubishi L400 Delica AKA “Hippo”, modified with a modest lift that allows it to carry oversized Mud Terrain tires. This vehicle suffered a mechanical failure during the final preparations in Caracas, thankfully it was repaired in time without any problems.

By week’s end, the entire group had arrived, including Mohammed, who had just doing 18000 Km on a motorcycle. The days before an expedition are somewhat agitated. Vehicle preparation tends to be one of the more time consuming tasks, because everything has to be ready, and the can be no loose ends. Those that re less mechanically inclined, can go on a city tour allowing themselves to view more thoroughly a city.

The responsibility of these last preparations falls on Miguel Ortega, a logistical coordinator for 4×4 World Explorer here in Venezuela. He explained to us some of the details of the logistical organization before the departure.
On Saturday, while the final preparations are made,. Thomas expressed to us that one of the vehicles needed alignment before departure, and we offered our assistance, guising him to a “trusty” shop to have the vehicle worked on. It just so happens that, being a national holiday on that particular Saturday, everything was closed. On that particular Saturday, Venezuela celebrated the anniversary birth of Simon Bolivar (1783) and the Battle of the Lake Maracaibo (1823).

For the space of a few hours, we had the pleasure of enjoying a long conversation with Thomas in one of the city’s cafes’. It was an ideal moment to Exchange ideas and opinions of the 4×4 hobby worldwide, the birth of 4×4 in Kuala Lumpur, as well as the fascinating evolution of the Rainforest Challenge over the years. This friendly chat allowed us to knit great friendship amongst ourselves and sharing future plans for 4×4 WE and J4C.

During the conversation, Thomas, in a very nice gesture on his part, gifted us a copy of the book “The Third Eye –Sixty days in South America” written by June Yap, who has been a member of the team in other occasions. The book, is a story of his experiences during a trip to South America in 2006 clearly reflecting the “adventurer spirit” and the natural wonders which they saw during their trip. The book was signed and dedicated to J4C, a perfect end to a very nice reunion.
After escorting Thomas back to his lodging, it was time to work on the details of the departure event of the expedition which were to be done the next morning.

In Caracas, Paseo Los Proceres was the perfect place to do the departure ceremony of the Trans Amazon 2 2010 Expedition. With the proper authorities informed and permissions given, we proceeded to park all of the expedition vehicles as well as those of J4C in front of the historic monoliths which commemorate our Independence and tribute to those that fought in our Independence war.

The last minutes of the ceremony were quite special, because our friends from 4x4WE were able to meet a couple of our expeditionary friends such as Parecupa-Meru (Jose Luis Cerrada) and Carlos Espinal, a known pioneer of the Venezuelan 4×4. The opportunity was also ideal to commemorate and document the book gift “The Third Eye” from 4x4WE to J4C’s staff. During this and all times of the ceremony the crews of KBS were documenting everything that occurred.

After our small conversations and rushed by the Schedule, we witnessed as every car in the Expedition Caravan was formally “flagged” by 1 member of each group who bore Malaysian and Venezuelan flags. It was a very special event with one of the most important locations as a backdrop to the occasion, where we were able to witness this very significant act of friendship leaving our country’s name up high.

We then proceeded to escort our friends’ caravan to the city limits when they finally departed on their journey.
We at J4C want to express our best wishes to 4x4WE as well as thank all of the members and friends of our community for their support during these preparations and events.

Thank you just4cruisersvenezuela for support this event and write this awesome article.

ABOUT US
4×4 World Explorer Sdh Bhd was the inspiration of the one and only Mr Thomas Foo. Its conception seed was from a Kuala Lumpur, Malaysia based 4×4 club in 1994. Over the decades Thomas, aka Tango, has lead and organised almost 100 travel expedition and events reaching all 7 continents and circumnavigated the global several times over!
Contact us: beeoutdoor@yahoo.com
FOLLOW US
© Copyright 2020 by 4x4 World Explorer Sdn Bhd